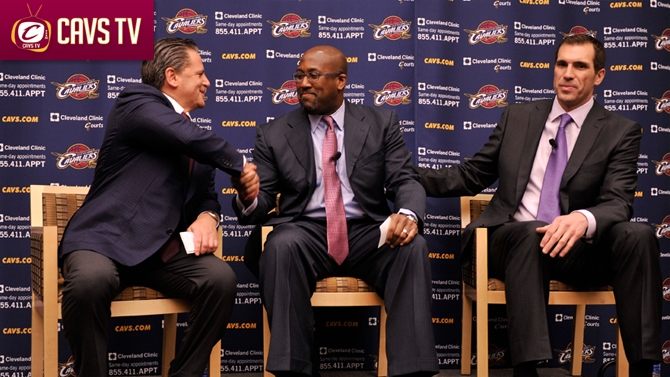 Have you ever quit a dream job? Ever get let go from a job? Ever end a relationship or quit training for something only to regret or miss it after time passed? Today I watched a press conference for new Cavaliers Coach, Mike Brown. Look, I’m a Cleveland guy so I still follow the teams (except the Browns, I left that camp a long time ago) and all the drama. Yes, I sat there tonight and watched a 30 minute presser and I’m not sure why. Yet I did take some lessons from that 30 minutes so it wasn’t a complete waste.

If you’re not familiar, Mike Brown was fired as the Cavs coach the summer that some guy named “Lebron” was making “the decision.” Some think that Mike got fired because Cavs owner Dan Gilbert thought that would make Lebron happy. Whatever the reason, Lebron took his talents to Miami and Mike Brown ended up being fired, hired, and later fired by the Lakers. Today he was re-hired by the Cavs and introduced as “Mike Brown 2.0.” Interesting approach. I found this 30 minutes fascinating on levels far beyond basketball.

When I was fresh out of college, I landed a sweet gig in sales. The problem was I had no commitments (wife, house, kids) and was wildly immature. I wasted that opportunity and eventually left because I thought the grass was greener somewhere else. Fast forward 4 years. Now I had a house and a child and my life was drastically different. My goals and priorities were much different. My 2.0 came one day when I had the opportunity to return to that sales job. Over the next 13 years (and thanks to those new priorities), I would experience success beyond anything I could have imagined. There is no way my 1.0 self would have ever been able to commit and work as hard as I did in order to see the fruit of those efforts. 2.0 was a renewal for me.

Ever been there? Again, maybe it’s a relationship. Maybe it’s a job. Maybe it’s just a season you are currently in. If you are currently in that land between 1.0 and 2.0, let me encourage you. Don’t give up. Don’t lose hope. I bet Mike Brown had no idea a month ago that he would again be the head coach of the Cavs. According to the press conference, he got the call on Saturday night. Things moved quickly after sitting an entire basketball season out. Your 2.0 could be a phone call away. When that call comes, embrace it.

If you’re beginning your 2.0 now, Mike Brown’s press conference had some wisdom there too. He was asked multiple questions about what he plans to do with this team. Much has changed since you-know-who left town. He’s actually taking over a team with major problems, but huge upside. Maybe you’ve said “yes” to a relationship, job or task that seems a lot tougher this time than when it was 1.0. Embrace it. Fight for it. Mike Brown answered each question with a passion to see this work. He committed to bringing a championship back to the fans of Cleveland. That’s no small commitment but the person (and team) that does it will go down in history. They will be a hero in “the 216.” Embrace your new opportunity. Charge forward like you’ll be that hero.

Lastly, if you’ve just left the 1.0 (or are thinking of doing so), do so with grace. Don’t leave bitter. Don’t burn bridges. One of the reporters asked Mike Brown a question (which he forgot) and he responded by saying “first off, how is your son?” To a reporter. At a press conference. It’s been 3 years and he still cared about this mans son. Someone asked if he was bitter about getting fired. He responded that anyone, including the very reporters in the room, that ran into him in the weeks that followed can testify that he was the same guy. He left well. He left with grace. Even when he was fired, he burned no bridges.

Today he crossed those bridges to his 2.0