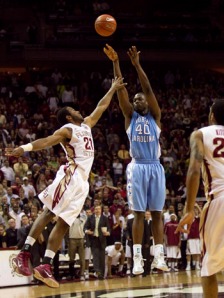 For the better part of 20 something years, I have lived and breathed with the North Carolina Tar Heels. Tonight “the boy” and I watched as another snapshot went into my mental scrapbook of why we love being a Tar Heel fans. This image was the final shot that sent North Carolina to the win and a head to head match up with Duke for the ACC Championship on Saturday night. We both calmly raised arms in the air as the three pointer sank into the net.

Earlier this week my lovely bride said she wanted to have a “date night” this weekend. She said “I was thinking about Saturday night”. I think my response was “Really?”. Realizing what Saturday night is, she quickly made plans for Friday night instead. If you think that is odd or funny, I have some Nashville friends (also Tar Heel fans) that did the same thing.

That’s what we do.

As nice as running away with an ACC Title is, I bet a straw poll of both sides would show that most Duke and Carolina fans would rather have it come down to this. The over-under would depend on where the game is being played (this one’s in Chapel Hill). This is what this rivalry so often comes down to. It’s what makes college basketball so fun. Saturday night aligns the stars for a winner-take-all shootout. It is as it should be.

2 thoughts on “As It Should Be”